Speakeasy in the news

The Florentine — the top English-language publication for the international community in Florence — published a nice little profile of Speakeasy Multilingual in their April issue. Our original goal in founding Speakeasy was to create a platform for language learners to come together and practice while having fund. But finding friendships and building community have been excellent side effects! 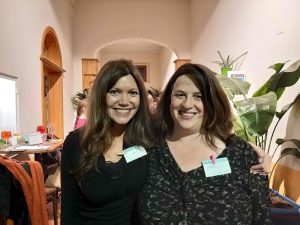 Miriam Hurley and Lexie Cimko created the Speakeasy Multilingual get-togethers in Florence in 2014.

Many an expat has found the familiar problem of meeting friends who then leave for their respective country. Miriam Hurley arrived in Florence for the first time in 1994, before several back and forths, and eventually finally settling here in 2004. “Each time I came back, I found that I had no friends again,” Miriam comments on the phenomenon of frequent friendship changes in the city. “Every foreigner in Florence I know has this problem because people come and leave, and come back again.”

To stay sociable in spite of the regular flux of friends, Miriam, along with co-founder Lexie Cimko, created the Speakeasy Multilingual get-togethers in 2014, starting with one or two attendees before quickly growing to groups of a 100 during peak summer sessions, with average numbers pre-pandemic at 40 and currently around 20. The social meet-ups have taken place in various venues on Wednesday evenings, with many nationalities attending the international aperitivos that are also well-attended by Florentines in a successful integration of communities. ….

For expats, international students, and anyone who needs to an international bank account or to send money between currencies and countries, Wise is far and away the best option. Use this link to get your first transfer free.

We use cookies on our website to give you the most relevant experience by remembering your preferences and repeat visits. By clicking “Accept”, you consent to the use of ALL the cookies.
Cookie settingsACCEPT
Manage consent

This website uses cookies to improve your experience while you navigate through the website. Out of these, the cookies that are categorized as necessary are stored on your browser as they are essential for the working of basic functionalities of the website. We also use third-party cookies that help us analyze and understand how you use this website. These cookies will be stored in your browser only with your consent. You also have the option to opt-out of these cookies. But opting out of some of these cookies may affect your browsing experience.
Necessary Always Enabled
Necessary cookies are absolutely essential for the website to function properly. These cookies ensure basic functionalities and security features of the website, anonymously.
Functional
Functional cookies help to perform certain functionalities like sharing the content of the website on social media platforms, collect feedbacks, and other third-party features.
Performance
Performance cookies are used to understand and analyze the key performance indexes of the website which helps in delivering a better user experience for the visitors.
Analytics
Analytical cookies are used to understand how visitors interact with the website. These cookies help provide information on metrics the number of visitors, bounce rate, traffic source, etc.
Advertisement
Advertisement cookies are used to provide visitors with relevant ads and marketing campaigns. These cookies track visitors across websites and collect information to provide customized ads.
Others
Other uncategorized cookies are those that are being analyzed and have not been classified into a category as yet.
SAVE & ACCEPT